Lock it Up! The Joy's of Male Chastity

When you first hear the word "chastity", you may think of a few things... a virtuous woman, a virginal woman... maybe even a medieval device used for woman to keep them "untouched" or "unspoilt". Regardless the idea of chastity or being chaste is something that is most frequently used in regards to a quality that is ideal for females to possess. I personally have never heard people talking about the value of a man being in direct realtion to his virginal behavior, unless it was to humiliate or degrade him. I guess somewhere that is a thing but for the sake of this post, chastity is traditionally something forced upon women, ultimately by men, so they will be "worthy of marriage". The women's chastity belt was just that, a belt with a metal piece that ran from the back of the waist down to between the legs and back up to the front of the waist. The area that is directly over the vulva, often had sharp bits to prevent even the slightest chance of penetration, allowing only waste out of the females body. Wearing it would often cause sores on the skin from prolonged exposure or chaffing, as the metal was quite rigid and prone to digging into the soft flesh of a womans body, not to mention potential sepsis from being unable to wash properly. 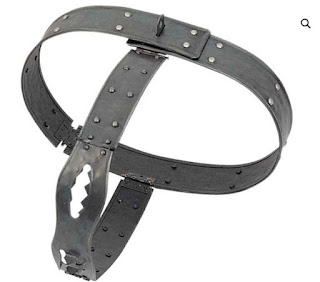 Doesn't sound like much fun to me and since it was hardly ever consensual, but rather forced, I am not a fan. I am also not a masochist or into someone else controlling my pleasure, so its definitely a 0/10 on the scale of interest. Of course you can find similar types chastity belts to purchase, on kinky websites and people use them for consensual play. Sure whatever gets you off, amirite? Now lets talk about something that is much more subversive, often taboo, and most often a topic of ridicule. A chaste male, a male who has been denied the ability to not only touch himself, but for all intents and purposes, can not even get a full erection, nor remain erect while in a male chastity device. The very idea is ripe with feelings that engender male infertility, loss of his verility, beta male, cuckold... It is a humiliation for a male to be denied access to his sex, but it's a virtue for a woman to be denied access to her sex. This is why male chastity is in my opinion much more subversive and taboo, and satisfying! We've already been there, done that with women.

Locking a male into a chastity device creates a real intense disconnection from the part of their body they connect with the most. They cannot touch it, they cannot stroke it, they can barely get hard and if they do it will not get fully erect as the cage is designed to not allow that type of growth. As a result, males start realizing they have to do other things to please themselves and the partner in their life. They realize ther is more to life then blindly masturbating for every and any reason. Usually, this leads them to focus more on their partners pleasure and often will have real conversations about how they can please their keyholder. Because, if the keyholder isn't pleased, then they will not be granted permission for release, not only release from the cage but also possibly release in the form of an orgasm.

Male chastity cages are designed differently than female chastity belts, mainly because of the shape of genitals differ as well as the placement on the body. It is imperative that males are measured before purchasing the device, because the ring that slides over the cock and balls that keeps the larger front piece of the device on needs to be exact. Too big and it will not stay secure. Too small and it will cut of circulation and that will cause damage. Even if the desire for locking your partner in chastity is to cause atrophy, you still want to make sure the base ring fits properly. There are also a variety of cock cages, including but not limited to; stainless steel and thicker varieties of sturdy plastic. I tend to prefer stainless steel, as they are much more resilient and I have had the plastic cages shatter/break. Not really the outcome you want, especially while your sub is wearing it. It is important to rememebr that at least once a day they will need to be let out for a supervised wash and promptly returned to the cage. Hygiene is still very important, even in chastity. 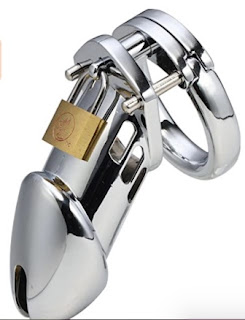 My favorite part of keeping a male in chastity is watching their ego magically disappear... They no longer can assert their masculinity vis a vis constant ejaculation. They know that they no longer have control of their favorite toy, and as I mentioned before, know they must please their Mistress in order to be granted release. It is such a mind fuck for them to experience what it is like to be chaste, for their cock to be inaccessable, for them to rely on someone else to give them permission to pleasure. It is during lock up that you can start refocusing their mind and teach them how to please you. Release isn't guaranteed or mandatory. Therefore, they will learn to focus on Mistress whether or not there is potential for release. The things you can train them to do for you, while they're locked up are endless. It really is up to Mistress to decide what she wants from her chaste sub, and they will soon learn that it is better to follow directions, ask permission, trust Mistress's judgment, and focus on her pleasure than forget the position they are in.

Some of my favorite things to train my chastity subs are; how to provide a proper foot massage, the way I like things cleaned and arranged in the house, the importance of checking in, making sure I am pleased in the moment and do not need anything, how to perceive My next move so they can be ready and waiting. I love teasing them endlessly while they are locked up, depending on what their weakness is, because then you get to watch their cock, no matter how big or small, absolutely struggle to get out of their cage. They will start dripping precum, which you can force them to eat... you can rub your feet over their locked cock, and watch as their faces crinkle up in horror... you can shove their face in your sweat soaked yoga pants. It truly is limitless, the amount of creative and fun things you can do to a man while he is locked up and being told no. Because lets face it, men have a hard time hearing no, and they all really need to accept that they should not and will not always get what they want.