A Spanking a Day?

As far back as I can remember, I was aware of power dynamics in relationships of all varieties, from social to personal to familial, etc. I always wondered if anyone else noticed these dynamics? I felt some people did, and the people who did would work to gain power over others, while others unconsciously fell into a role or power dynamic and whether they were conscious of it or not, loved the role they chose, regardless of its probability to be psychologically injurous. I would watch how my mother manipulated my father and how she manipulated her children, enthralled by her ability to act as if the story she told herself to justify her manipulations was goddess's honest truth.

I don't remember doing this to him, so I cannot recall the thought that crossed my brain in this moment, but it seems it was a very early awareness of how I could manipulate the situation to my benefit. According to my brother, I looked at him and smiled a reallly big smile and then in one swift motion, drew my hand up and clawed his arms with my nails. Before he could protest or call out, I screamed bloody murder and then called for our mom. When she got there and saw my brother scratched and me crying, she figured older brother did something to younger sister, and not only did he get in trouble, I got to play with the car. Problem solved.... (I feel utterly horrible when I think of doing that to my brother, as an adult. Kids can be cruel but him and I are best of friends and have been ever since our teens. Needless to say, he forgave me for that, and many other shitty things I did to him)

The first time I realized I was a little different in terms of how I related to my peers outside of my family, or at least the first memory of being quite different was during preschool. We were all at recess and I was playing house with the other kids, except I wasn't acting as a parent. There were two kids playing mom and dad and I was sitting on a chair in the play kitchen and several children were lined up to receive a spanking from me. Each kid would lay over my lap and I would pull their pants down just enough to expose top cheek, and I would spank them a couple times for being bad then send them on their way to help mom or dad with tasks. The most amazing part about this scenario when I look back as an adult was how many children just lined up for spankings without question. I know I was bossy but I also wasn't into pressuring others into doing things they didn't want to, so it wasn't a forced thing.

I wish I could rememeber the countless experiences I had where it was blindingly obvious that I loved the feeling of being in control and dominating those who seeked that dynamic, whether they were cognizant of it or not. I can't even count the amount of times I was called 'bossy' because I knew how to get shit done and how to do it quick.

My dominance is a gift and I am grateful for it. Are you? 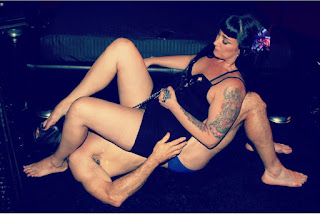